A charity night held in support of her brother-in-law Mick Noble helped Jan Chappell raise over £4,800 – with support from family and friends along the way.

Jan, from Essex, organised the event with daughters Jade and Ria after her sister’s husband was rushed into hospital, and after two months, fast-tracked for a double lung transplant in August. Mick had lived with PH for 17 years and celebrated his 40th wedding anniversary with wife Deborah two days before the operation

Mick was determined to be well enough to attend the fundraiser at Paringdon Social Club in Harlow, and received a standing ovation on his arrival

Jan said: “It’s  been such a roller-coaster for the family since Mick went into hospital so for him to be able to make the event was fantastic. It was very emotional but he was so pleased he could be there and he even managed to get up and give a talk about PH.

“The support we have had for the event has been amazing and both Mick and Deborah have been completely overwhelmed. We hope and pray that we have raised awareness of PH and will continue to do so.”

Mick and Deborah’s daughter Leanne Noble is organising her own challenge, ‘Hungry and Hairless’, which will see her aim to lose two stone in return for sponsorship. If she succeeds, her husband will wax his chest. 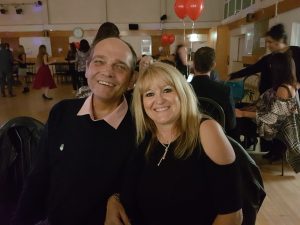