Living with PH: the results

Thank you to everyone who took part in the 2016 Living with Pulmonary Hypertension survey, designed to gain information on the patient journey and how PH impacts on daily living.

We received 563 responses and have been able to compare results with similar surveys carried out in 2007 and 2010.

70 per cent of participants were female.

48 per cent of respondents waited over a year for a diagnosis after first experiencing symptoms.

Many patients, 46 per cent, had their symptoms for over six months before going to see a doctor.

32 per cent of patients were admitted as an emergency because of their symptoms.

40 per cent of patients saw four or more doctors being diagnosed.

Both time to diagnosis and the number of doctors seen before diagnosis remain as good, or slightly better, than reported in the two previous surveys.

92 per cent of patients said they thought it was better to travel to a specialist PH centre rather than to be under the care of a non-PH specialist at a more local hospital.

This survey found that care of patients with PH is perceived as good or excellent and patients were keen to travel to specialist PH centres for their care.

Compared with the previous survey in 2010, the percentage of patients seeing more than three doctors before diagnosis was reduced, possibly suggesting an increasing awareness of pulmonary hypertension amongst physicians.

However, a large percentage of patients had symptoms for more than six months before seeing a doctor, which has hardly improved since previous surveys.

As earlier diagnosis of patients results in better long-term survival, we will continue to work to raise awareness of pulmonary hypertension in the UK.

The Spring issue of Emphasis will contain further details on the findings of the 2016 Living with Pulmonary Hypertension survey. Thank you to everyone who took part.

In December, we presented an abstract of the study at the British Thoracic Society Winter Meeting. You can read it by clicking the image below. 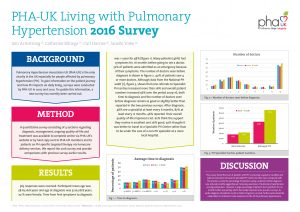