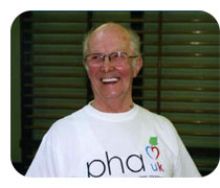 It’s impossible to find the words to describe how much better I feel since I had my operation, a thromboendarectomy, back in August 2005. I want to sing and shout it from the chimney tops, I feel so marvellous and so grateful to all the doctors and nurses who helped me get my life back.

I had suffered from angina for 25 years but around about 2002 it got worse and I was having dizzy spells and blackouts. I was in and out of hospital for three years in Chesterfield undergoing tests.They thought there was something wrong with my heart.

My quality of life was getting worse I couldn’t breath properly or walk any length. I was dependent on oxygen all the time. It was dreadful. It was pumped around the house and I never went out without my backpack of oxygen. I had always lived a healthy life, never smoke or drank and I had kept very fit. I used to cycle and take part in races, I went to the gym regularly. I couldn’t understand what was happening.

Then during one of my stays in hospital at the end of 2004, just before I was due to go home, I collapsed. I was referred to hospital in Sheffield and there, after a week of tests, I was diagnosed with thrombotic pulmonary hypertension. I was sent to Papworth in June 2005 because the doctors said I was a candidate for
surgery and from there it all took off. It hit me very hard at first and I was scared, but I am a strong person and I thought I can handle this. I was told that if I didn’t have the op, my life expectancy wasn’t very long. If the operation worked it would change my life completely, but there were no guarantees. It was a huge operation, lasting nine and half hours, and very risky.

My daughter, Karen and my son, Mark, were very supportive as my wonderful wife June, died in 1991. So, in August 2005, I went into Papworth.I am delighted to say it was 100% successful and I would urge anyone who has to have this operation not to worry too much. It has completely turned my life around. I used to be on 32 tablets a day beforethe op, now I only take six. I can do whatever I like. In fact it has changed my attitude to life. I used to say ‘I’d like to do ballroom dancing, now I say ‘I’m going to do it’ and I have. I sing in two choirs, although the Christmas before the operation I managed to sing solo, the Holly and the Ivy, for a choir complete with my oxygen cylinder behind me and a canula in my nose. Thank god thosedays have gone.

I climbed two thirds of the Great Wall of China last year and later on this year I am going on a cruise to Bermuda, the Canaries, Casablanca and Portugal. I also go to the gym three times a week. I feel so lucky. My life has improved 200%. I couldn’t do anything for myself beforehand – cleaning, ironing, shopping you name it. Now I can do the lot and I cannot thank the medical staff enough.

Anyone who is worried about the operation can call me anytime for a chat and I will do my best to put their minds at rest. Tel:01246 235 840.