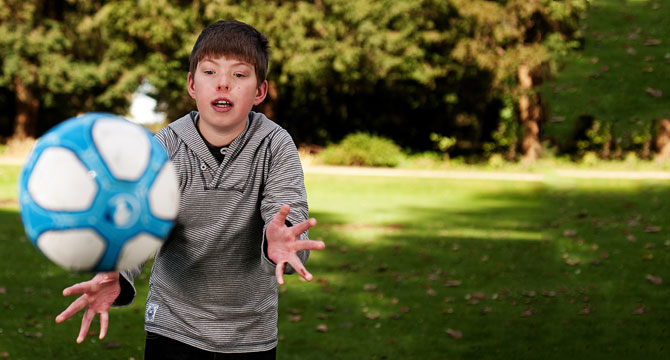 Eleven-year-old Kieran is preparing to start secondary school this year. He is mad about Dr Who, likes a bit of Lady Ga Ga and loves video games, Lego and swimming.

The fact that he carries life-saving drugs in his backpack and takes oxygen with him where ever he goes makes no difference to all that.

“Kieran does pretty much everything other kids do, we just take it all at his pace,” says his Mum Julie Clarke. “And, as parents, we have to be very, very organised.”

Kieran has pulmonary hypertension. The drug Epoprostenol is constantly administered to his heart, through a Hickman line,by a pump carried in his backpack. Oxygen is pumped into his bedroom overnight and when needed. To manage his condition and keep him well, he also takes Bosentan and Sildenafil everyday, as well as Warfarin and diuretics.

“Kieran has developed allergies to dogs, cats and house dust mites as well now, so we’ve had to add another drug to the mix!” laughs Julie. She says Kieran’s Dad, Martin, is speediest at preparing the essential Epoprostenol medication which takes about half an hour to make up every day.

“This is ‘normal life’ for us, we don’t know any different. PH is part of our life but doesn’t rule our life and when things are good we just get on with it.”

Kieran collapsed within a few hours of being born in 2000 and spent two months in a neo-natal unit as an ‘unknown oxygen dependent’ before beginning thorough tests at the Royal Brompton Hospital in London. He was diagnosed with pulmonary hypertension at five months old.

Baby Kieran was allowed home for the first time for just a couple of hours on Christmas day 2000, but then it was back to hospital where he spent many of his young days.

“I remember us having to be admitted tot he Royal Brompton one day after an appointment in the clinic. The doctors were concerned about Kieran’s oxygen levels. It was the day after September 11th and I really didn’t want us to be in London,” says Julie. “It was eerily quiet on the ward as no aeroplanes were allowed to fly over.”

The family, from Essex, went through a very tough first few years as little Kieran battled with his condition, had to fight off pneumonia and endured frightening complications when he went under anaesthetic to have his first Hickman line fitted.

He is now doing nicely, following adjustments to his medication and has kept his original Hickman line for seven years with just three repairs. He is cared for through Great Ormond Street Hospital.

“The next thing we will have to discuss with our consultant is whether Kieran is to go on the waiting list for a lung transplant. It’s difficult because he’s doing so well now on his medication. We’ll hopefully speak with other parents we’ve met through PHA UK who’ve been in a similar situation.”

In the meantime, Kieran has weekly swimming lessons in the specially adapted dry suit PHA UK helped to fund to protect his Hickman line. He visits Colchester Zoo, gets on with his school work and even enjoys going to the occasional zany, two-tone ‘Madness’ gig with his parents.

“Martin and I both like Madness,” says Julie, “We had one night out to the musical ‘Our House’ when Kieran was in hospital in London as a baby. “Luckily, Kieran likes them too now and we can all go together.”